LAHORE, APRIL 2018: Dhoom Machade was the theme of CCL’s Annual Gala this year, which was attended by over 850 enchanted employees at the Tehxeeb Marquee in Lahore. The event was unveiled with an electric video and a stirring entry of Kashif Sajjad Sheikh, MD and CEO of CCL on a heavy bike revving zealously with the background music of a racing bike accompanied by the whole management team of CCL. It inspired the whole crowd like a raw high octane action sequence of a movie.

Saman Najeeb, HRBP CCL Plant and Irfan Sohail, Regulatory Affairs Manager were the hosts of the show who entertained the audience with lively chatting. Naoman Pervaiz Ahmed, HR Business Partner IntOps and Shared Services was the joint project lead with Saman and a few more members, who made the event a success.

Later the emcees introduced the CCL musical band who made a lilting performance on the stage. This was followed by an exciting announcement by Shoaib Ahmed, CHRO about contract workers’ status in the plant.

It was interspersed with a few rapid fire rounds of interesting questions, which won the audience valuable gifts, songs by Usman Khan, Amanat, Amna and Asad, 12 Good Attendance Awards by CHRO, Innovation Award of the Year by MD, a speech and donation request by Muhammad Jafri, Program Director of Dilawar Hussain Foundation, 16 Employee of the Year awards, 3 MD Awards and many entertaining activities. It was followed by a session of lucky draws for Ummrah, international air ticket, vacation in Murree for 2 days and 2 motor bikes. The event ended at a  sumptuous dinner and a musical concert by Musarat Abbas and Malka. 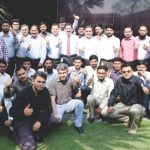 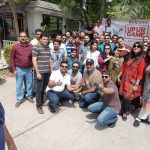